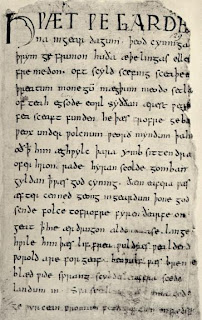 Languages transform through time.  Utterly unrecognizable is the following line of Old English poetry:
“hû þâ äðelingas ellen fremedon..” (see image).
Written about a thousand years ago, in modern English it would read: ‘How princes displayed then their prowess-in-battle.’[1]
Old English during that period was similar to other European languages;[2] they were mutually intelligible,[3] and one group could easily understand the other.  In time, each language would evolve, but it wasn’t until the 15th century that each of these languages became standardized with the introduction of printing presses[4] to Europe.
Classical Arabic is rooted far deeper in ancient history.[5]  Referred to as the only living member of the Old North Arabian group, it evolved from Old Arabic, which coexisted with other mutually intelligible languages in the Arabian Peninsula at the time, and is found today in inscriptions dating back to the 1st century B.C.[6]  Evolving from these beginnings, Classical Arabic reached maturity in the late 6th and early 7th century with the advent of the Arabic Qur’an.
The standardization of Classical Arabic is quite remarkable.  In the early 7th century, believers began to memorize the Qur’an ad verbatim for prayer recitals, as guidance to daily life and for legal matters.  They first carved its verses into memory, and then onto pieces of wood, leather, palm-fronds, and parchment.
Meanwhile, Islam was rapidly spreading:  “Only a century after its inception in Mecca i.e., A.D. 622, the new religion dominated an area extending from the Iberian Peninsula in the West to the steppes of Central Asia in the East.”[7]
When the Chinese craft of paper-making arrived at their frontiers in Samarkand, Muslims began to mass-produce and distribute identical manuscript texts of the Qur’an.  By some accounts, this was around 500 years before printing presses[8] were first used in Germany[9].  What this did however, is simply confirm and broadcast what had already taken place three centuries ago:
The Arabic language had already been standardized in a unique relationship between believers and the oral compilation of Qur’an.  In fact, no sooner had the Qur’an begun to be memorized in 610 AD, than it began to standardize the language!
For comparison between the usage of the English and the Arabic languages centuries ago, look at this historic manuscript dated 22 A.H/642 A.D. You will notice that it is much like the Arabic script of today -even the letters are dotted!  Also check out the LEXICON we use in our daily Readings, whose author died more than 1000 years ago.
The Qur'an and the Arabic language have both preserved each other, and nothing can change that.  What should change is OUR level of understanding Arabic so as to present authentic Qur'anic concepts.
[1] From ‘Beowulf,’ an epic poem describing the adventures of a great Scandinavian warrior of the sixth century.

[2] Especially Old High German and Old Dutch.  The hypothetical common ancestor (proto-language) of all the Germanic languages (modern English, Dutch, German, Danish, Norwegian, Icelandic, and Swedish) is referred to as Proto-Germanic, or Common Germanic.  It is hypothetical because there is no surviving text; information has been reconstructed using the comparative method (http://en.wikipedia.org/wiki/Proto-Germanic).
[3] Mutual intelligibility: a relationship between languages in which speakers of different but related languages can readily understand each other without intentional study or extraordinary effort.
[4] Devised by German craftsman Johannes Gutenberg
[5] From the Afro-Asiatic, or Hamito-Semitic (حامي- سامي) family, of which is Akkadian (or Aramaic) with which Arabic still has much in common.
[6] Old Arabic was attested in written form in an inscription in Qaryat Al-Faw (Qaryat Dhat Kahil) in the 1st century BC. (http://en.wikipedia.org/wiki/Ancient_North_Arabian). Qaryat Al-Faw, is the capital of Kinda and other Arab tribes (http://www.islamic-awareness.org/History/Islam/Inscriptions/faw.html)
[7] Dictionary of the History of Ideas: http://etext.virginia.edu/cgi-local/DHI/dhi.cgi?id=dv2-72
[8] Discovered in excavations at Fustat (old Cairo), archaeological context made it possible to date these manuscript texts to the 10th century.
[9] Geoffrey Roper http://www.khtt.net/person-578-en.html
awaiting your comments! R. H. D. 1 comment: