Verse 52 announces that God suffices as Witness, knowing what is in the Heavens and Earth… and ends with a note of warning.
PAGE 403 Arabic Qur’an.
4.  In Verses 53- 55 the Deniers challenge the Messenger (and God), telling him to hasten the Suffering (we read something similar in HQ 22:47; 26:204).  They are then forewarned.
In Verse 56 God speaks to His Worshippers, telling us to worship Him (wherever we can) in the vastness of His Earth,
Verse 57 assures us that every Self shall taste Death, and then to him we shall be returned (put كل نفس ذائقة الموت in Tanzil, or see HQ 3:185; 21:35).
5. In Verses 58- 59, Those who have attained Faith and performed Goodness, are promised the bounties of the Garden.  Their Faith, together with their Good Deeds, Forbearance AND Reliance on God, have earned them the Label ‘aamileenعاملين- ’ or Workers/ Laborers; in this instance: Achievers!
Verse 60 indicates that God provides for/ sustains all living organisms that roam the earth (daabbahدابّة-), AND yourselves.
Although this verse expresses His Bounty -in general- towards all Creation, it clearly indicates to Cognizant Humans that our provision IS DEPENDENT UPON other creatures being sustained.
§  To Qureish, this verse put them in their place: As business-minded people they were reluctant to relinquish their hold over Pilgrimage Revenues and the power it generated (in their mind, the 360 idols around the ka’ba were generating their income. How little foresight they had!).
This verse was assuring them that they would lose no provision by worshipping God Alone.
§  To the Faithful, this verse offered not only Hope, but a Promise of Sustenance, (after Verse 56 had told them to leave if necessary, and go elsewhere where they could worship in Pure Reverence and live in Accountability).
§  To us Cognizant Humans of today, this verse:
·  puts us in our place.
·  offers Hope and a Promise of Sustenance.
· AND illustrates the necessity for us to be Eco-friendly: Our provision IS DEPENDENT UPON other creatures being sustained.
Just think of all the crops we grow, and that one OUNCE of the good-quality soil we need contains around ten trillion bacteria.
Look at the illustration from Merriam-Webster.com (click to enter): 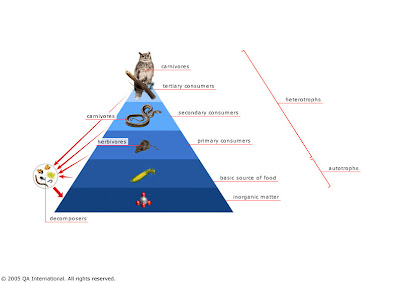 Q. Are we at the top of the food chain?
A. We are, and then again, we aren’t.  It all depends on how we look at it:
Ultimately it is ‘Decomposers’ such as funghi and the 10,000 different species of bacteria in the soil that ‘eat’ everything, including Humans.
(HQ 11:6 is another verse indicating God’s knowledge of, AND providing sustenance to EVERY living creature ‘daabbah.’)
Verses 61- 63 ask Qureish, who is He who created… who provided…who brought back the dead earth to life.. ?  And they always answer ‘God.’
(Similar to HQ 10:31; we discussed how Qureish could give such a response yet deny His Message on May 12th.)
PAGE 404 Arabic Qur’an.
6.  In Verse 64 the difference between the Life of this ‘Lower Existence’ (Dunya) is shown, as compared to the LIVING Hereafter (the Hayawaanحيوان-  (
Regular Readers would have noticed the grammatical form of the verb: فعلان !
Verses 65- 66 describe our need for God when our vessel is tossed (in mid-air or mid-ocean) with NONE who can help us take it to land …. except He.
The ‘fulk’ is literally a circular or rounded vessel without sharp corners, discussed on April 9th.  It comprises ANY vessel we build for transportation (see HQ 43:12).
7.  Verse 67 asks Qureish how they could deny God’s Bounty, and how they could believe in Falsehood, seeing that God has rendered safety and security at a ‘Sanctuary Secure’ (the Inviolable House and vicinity: Mecca), while people all around them are completely insecure ‘being snatched away’?
Verse 68 announces the characteristics of those who are most Wrong-doing, and dissuades from such action by presenting Hell as their abode.
With Verse 69, the Chapter ends with Persuasion:
This verse announces that with regard to Those who have exerted themselves for God, Indeed, He shall surely ‘guide them/ grant them’ His channels (the paths or ways that lead to Him), and God is indeed WITH The Doers of Good ‘Muhsineen.’ (Note that they have earned the label!)
This verse encourages us to ‘exert ourselves’ in doing the right thing, in Pure Reverence to God, and in Accountability to Him, which translates into our accountability towards ALL our fellow Creatures on His earth!  That is the ‘jihaad/ jihad’
Enough said!
Our next Reading is from HQ 30:1-27; a new Chapter!
Peace unto all!
[i]Remember that ‘Awareness/ Taqwaتقوى-’ is the opposite of ‘Aggression/ Udwaanعدوان-’-Put ‘Udwaan’ in ‘Search this Site’.
[ii] ووصل الأمر إلى أنهم قالوا إن آية السيف نسخت مائة وأربعين آية في كتاب الله، بل بعضهم قال نسخت مائتي آية، وإن هذه الآيات موجودة في المصحف خطًا ولفظًا ومعدومة المعنى: http://www.qaradawi.net/site/topics/article.asp?cu_no=2&item_no=7197&version=1&template_id=211&parent_id=16
[iii] جحد: يدلُّ على قِلّة الخير. يُقال عامٌ جَحِدٌ قليل المطر. ورجل جَحْدٌ فقير، وقد جَحِدَ وأَجْحَدَ. قال ابن دُريد: والجَحْد من كلِّ شيءٍ القِلّة.
ومن هذا الباب الجُحود، وهو ضدّ الإقرار، ولا يكون إلاّ مع علم الجاحد به أنّه صحيح. قال الله تعالى: {وَجَحَدُوا بِها واسْتَيْقَنَتْهَا أَنْفُسُهُمْ} [النمل 14].
وما جاء جاحدٌ بخيرٍ قطّ.
awaiting your comments! R. H. D. 5 comments: