IN SEARCH OF OUR PRIORITIES:
1.Filling the Void 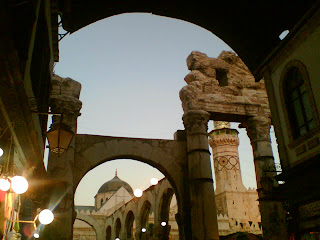 We consider ourselves Muslims.  We state that our faith is Islam.  Someone asks us about major priorities in Islam.  We go into automatic gear, speaking of the ‘five pillars’ that uphold Islam.  Not until we have finished rolling out the shortlist (bearing witness to God’s Oneness & to Muhammad, His Messenger, observing Prayer, fasting Ramadan, giving Poor-dues, and performing Pilgrimage), does the courteous inquirer say, “But I did not ask about Islam’s foundations, I asked about Islam’s priorities.”  We are then at a loss for words, and with good reason.
The Five Pillars
To begin with, the ‘Five Pillars of Islam’ (arkaan-ul Islam) is a term Muslims have used for centuries, a scholars’ paraphrase of a saying attributed to Prophet Muhammad (peace upon him), “Islam was built upon five…”.  We have found ourselves at a loss for words because we’ve just realized that foundations are of a structural purpose, hidden beneath, or built into the structure itself.  We realize that, just as we cannot equate the foundations of a building with the building itself- or all it holds or signifies, we cannot equate the ‘pillars of Islam’ with Islam, let alone limit the entire faith to them.
On the other hand, we feel reluctant to let go of the five pillars as priorities.  We know the value of these ‘five pillars,’ these personal acts of worship we teach our children at an early age, often by example.  Many of us began to pray, returned to prayer, or observed prayer more heedfully, having parented a discerning child.  Ideally, these acts of worship are the physical and mental ‘time-out’ we take from worldly matters to enter a state where we become conscious of our Creator and of our relationship with Him.  Ideally, these acts of worship build our self-confidence and will-power, enhance our spirituality, strengthen family and community ties, and enable us to be more generous towards others.  Ideally, these acts of worship provide us with the gear necessary to embark upon life’s journey, achieving our priorities and fulfilling our roles.  But what are the priorities?
Our Status Quo
In a perceived absence of other priorities, we have remained at a standstill, suffering varying degrees of loss in our spirituality, self-confidence, will-power, generosity, family and community ties, all in a state of yearning for meaningful goals beyond the self-improvement shortlist.  Having, in fact, misplaced Islam’s priorities, we now glumly admit that we lost precious time and effort running in circles around a few principal acts of worship intended for us as basic gear.  With heavy hearts we realize that both our ‘practicing’ and ‘non-practicing’ Muslims, perhaps even more so the ‘practicing’ Muslims, seem perpetually fixated on the gear.  To make matters worse, there are a few who, having considered themselves ‘practicing Muslims extraordinaire,’ went on to fill the void by compiling their own list of priorities, relying on certain misinterpretations which the majority of us had failed to address.  They then turned to active, even violent, pursuit of their priorities, to the detriment of our peace-loving communities, as well as the world at large.
We were, and most of us still are, in a state of denial.  In countering attacks against Islam some of us have used a self-aggrandizing approach while others have adopted an apologetic tone.  Neither will serve us.  Denying the existence of a problem only allows it to grow.  The fact that Islam-bashers may have touched upon the heart of one problem or another only served to make us more vehement in defense and denial.  We must not deny the existence of any of our problems, beginning with that of misplaced priorities. Where they should have been rooted in our consciousness, there is a gaping void.
….to be continued…
awaiting your comments! R. H. D. No comments: