WEEKEND THOUGHT
"In the Middle Ages, while Europe was mired in superstition and feudal chaos, Baghdad was the intellectual center of the world. It was there that an army of translators and scholars took the wisdom of the Greeks and combined it with their own cultural traditions to create a scientific, mathematical and philosophical golden age. Their accomplishments were staggering, including the development of modern medicine, chemistry, and algebra. Muslim scientists correctly calculated the circumference of the globe in the tenth century. Muslim musicians introduced the guitar and musical notation to the Europe. And Muslim philosophers invented the scientific method and paved the way for the Enlightenment. At the dawn of the Renaissance, Christian Europe was wearing Persian clothes, singing Arab songs, reading Spanish Muslim philosophy and eating off Mamluk Turkish brassware. This is the story of how Muslims taught Europe to live well and think clearly. It is the story of how Islam created the Modern World."
When all of Europe, minus Spain,
was in its Dark Ages
Islam was in its Golden Age:
The language of Information and Innovation was Arabic.
Andalucia (711-1492). 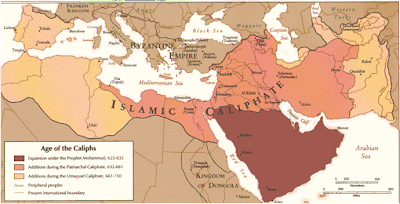 The Islamic Caliphate in 750
These are the Arabic Numerals, differentiated by number of angles:

Read:  'How Islam Created the Modern World' by Mark Graham.
God Bless you all!